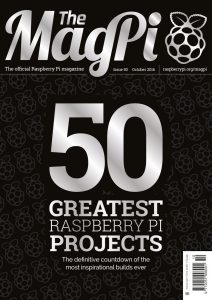 The excellent Raspberry Pi magazine The MagPi have released their 50th issue (free to download but also available to buy in print).

To celebrate they feature the top 50 Raspberry Pi projects as voted for by readers and their panel of judges. We are very pleased to have been included in their top software projects as judged by Eben Upton. Thanks!

Thanks also to everyone who has contributed to the RetroPie project and to the developers of the many emulators and games that we include.